Get fresh music recommendations delivered to your inbox every Friday.

Awake When You Dream 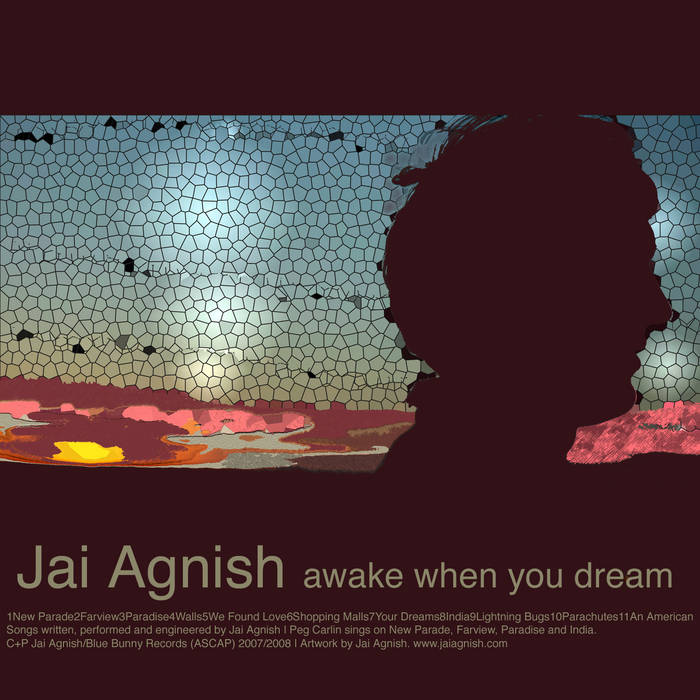 New Jersey based indie artist Jai Agnish has released his third album, Awake When You Dream, as a free digital download. Agnish, who has received critical acclaim for his work as an electro-acoustic pop experimentalist -- wanted to see what he could pull off without the machines.

Agnish sets out on this 11-song journey with his trusty Gibson J-45 and a 1980's Roland synth. The songs are grounded in acoustic guitar rhythm with Agnish weaving lead guitar and synth melodies playfully throughout. Agnish performs all the instruments and is occasionally joined on vocals by Peg Carlin. Agnish also multi-tracks his own voice in new ways while experimenting with harmony and spatial nuance. Even without drums the songs are surprisingly rhythmic as Agnish takes advantage of upbeats and less obvious rhythmic patterns without losing the listener. The music, which was recorded by Agnish over a year-long period on his home computer, has the intimacy of a home-recording but the clarity of a "for-real" studio.

Parts of "India" were written by Sean and Justin Walker, longtime friends that grew up in the same neighborhood as Agnish. Around this time, the group performed live as "Jai Agnish and the Callbacks" and "The Callbacks" in the New York City area. Many of these songs were part of those setlists and are here at times reimagined, however, without these bandmates on the recordings. The Walkers undoubtedly influenced and informed the shape of these final takes, albeit different sounding than those live sessions, but they should be acknowledged as being a part of this album in ways that go beyond their actual presence on the tracks.

Lyrically, Agnish explores the imaginative and political. Topics range from love and dreams to shopping mall sprawl, protests and family adventure stories. With "India" Agnish shares his impressions of connecting with his Indian heritage when he visited the country for the first time. "Lightning Bugs" is a fantastical tale Agnish wrote for his 2-year-old nephew.

Bandcamp Daily  your guide to the world of Bandcamp

Little Brother joins the show to discuss their beautiful journey, plus tunes from Fat Tony